Often the richness of the past does not leave one but several traces. This is the case for shipwrecks. During the Early Modern Era, ships belonged to royal and public armadas – or navies – and these ships occasionally ran aground on sandbanks or sank at sea. The coast of Galicia, in northwest Spain, has hidden underwater hundreds of ships that sank between 1600 and 1800. One of these ships, which sank around 1600, is called simply the ‘Galleon of Ribadeo’.

In June 2015, the nautical archaeology team of ForSEAdiscovery collected samples of timber from the Galleon of Ribadeo. As of yet though, we have not identified the ship. We do not know its name or even the armada or squadron to which the ship belonged. We do not even know the precise year in which in sank, or when it was built. We barely know that we are dealing with an enormous galleon that went down in the late 16th or the early 17th century and that it was built in accordance with Hispanic shipbuilding techniques of the period, thanks to previous archaeological work of the vessel’s architectural features. Identification of the ship is a task in which the collective and collaborative efforts of ForSEAdiscovery are being put to work. Studies on timber provenance conducted by the team’s wood scientists will allow the determination of a date and the origin of the timber used to build the galleon. Finally, following the clues provided by archaeologists and wood scientists, the project historians can dive into documents in archives with the aim of historically situating our galleon. Here I will tell you some exciting details about what I found in the local archive of Ribadeo.

When I arrived at Galicia the third week of June, the archaeologists had already been working hard for a few weeks in at the Bayonnaise in Finisterre and La Magdalena in Viveiro. Next stop: Ribadeo. I joined the team there, where we discussed the way to develop the research strategies that we had defined some weeks earlier. Given my expertise as a historian and my poor condition as a seaman (having gotten seasick the only day I sailed with the archaeologists), I focused on archival work instead. The local archive of Ribadeo contains a specific source that seemed a promising starting point: the minutes of the village council. 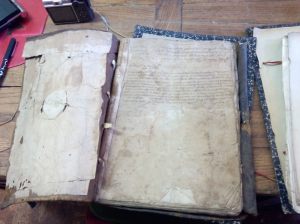 16th century documents in the archives in Ribadeo.

During the Early Modern Era, as it still is, the council was the main local institution governing villages in Spain; and also like nowadays, village councils recorded in writing the details of agreements and debates that took place during their meetings. A scrivener was in charge of this task. Fortunately, a large part of the Ribadeo council minutes dating to the 16th and 17th centuries has survived the passing of time and is still safely guarded in the present-day council house. I spent many hours transcribing documents and taking notes on possible clues to the original identification of the Galleon of Ribadeo and the circumstances of its wrecking. Now it is time to process and organise those transcriptions and notes because at last I found a clue: a galleon named Santiago ran aground in the river Eo of Ribadeo in 1597.

That might just be our galleon, but before we jump the gun and carve it a nameplate, more work needs to be done in archives. In the coming weeks, I will be compiling my notes from the Ribadeo Concello  and cross-referencing them with documents being collected and collated by fellow team members in other archives, such as the Archivo General de Simancas. Then the streams of data coming from archaeological and wood analyses can be cross-referenced with archival information. In this way, the much discussed international collaboration between different scientific disciplines is becoming a reality in ForSEAdiscovery.

Dr. José L. Gasch-Tomás joined the team of historians at Consejo Superior de Investigaciones Científicas (CSIC) as an Experienced Researcher (ER1) for the ForSEAdiscovery project in December 2014. He earned his Ph.D. in History from the European University Institute (EUI) of Florence, Italy.