Whenever I have the chance to visit Simancas, I take it. You, dear reader, might be wondering both where is Simancas, and what can be found there to make it such an interesting destination. Such enquiries are valid, and I hope to answer both. 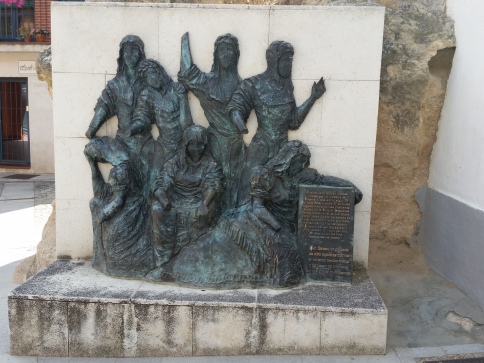 Memorial in honor of the seven women of Simancas.

Simancas is a town and municipality located in Castile and Leon near Valladolid (Spain). According to legend, the etymological origin of the word ‘simancas’ dated back to the 9th century when the Muslim king Abderraman II forced the Christian kings to provide him as tribute one hundred virgin Christian women, of which the villa of Simancas (presumably under a different name then) provided seven. However, each of these women cut off one of their hands before approaching Abderraman. Upon seeing their mutilations, he refused them, stating: “If you carry them one-armed I do not want them” (Si mancas me las dais, mancas no las quiero). Nowadays there is a memorial of those legendary Simancan women.

However, despite this dark legend, Simancas is an attractive spot especially beloved by history and castle geeks because the General Archive of Simancas (Archivo General de Simancas) is found here. It stores one of the largest primary source collections related to the Spanish Monarchy and Europe throughout the Early Modern Age. 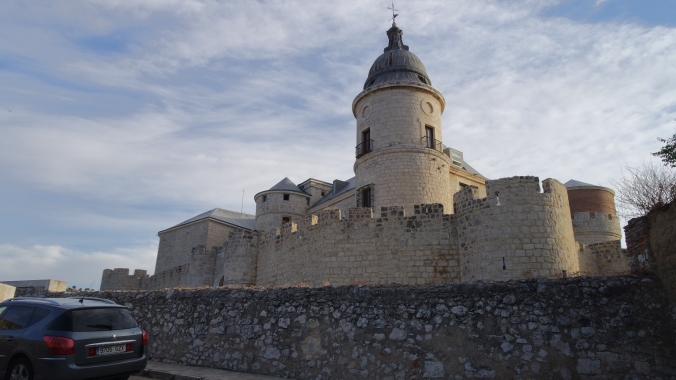 Castle of Simancas where the General Archive is located.

Whether visiting for research or pleasure (or if you’re like me, it’s both) just approaching the archive is a stimulating experience that begins by merely beholding the building which contains the General Archive. The Castle of Simancas is certainly one of the foremost eye-catching features of the area, and this outstanding historical building can be seen from afar, as it projects its dominium from the hilltop and enriches an already remarkable landscape. 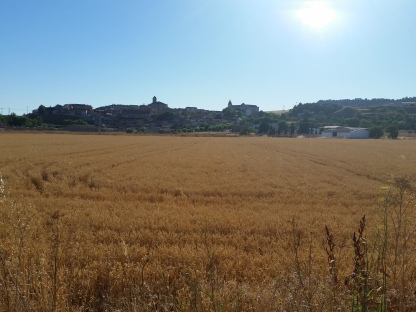 Simancas with typical yellow-coloured Castilian grass, with the Castle visible in the background.

Once you have entered into the Archive you meet the friendly staff, who are eager to help visitors with the research they wish to conduct. This has been the case since the first time I visited the Archive in 2010, and it is a feature I personally appreciate because elsewhere, archive staff is not always so welcoming or friendly or eager to help with research. The work environment is also enhanced by the research room, which preserves the original 16th-century design by the royal architect Don Juan de Herrera, who also designed the Royal Palace San Lorenzo de El Escorial. Working there feels like time-traveling to the 16th century in an exquisite wooden chamber. 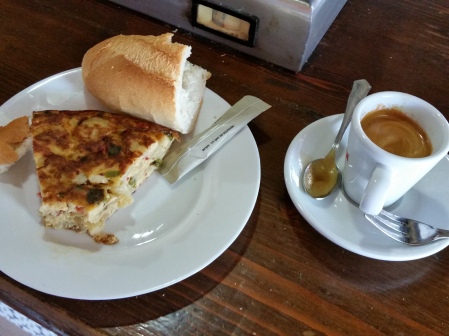 A coffee and Spanish omelette in the restaurant El Archivo.

Even in such an environment, research cannot be conducted without resupplying carbohydrates, fats and proteins to your brain. At this point it is mandatory to take a break and head towards the restaurant El Archivo, where you can sip a delightful cup of coffee, served together with a Spanish omelette (café solo y pincho de tortilla). Now you are enable to carry on looking at old dusty papers!

When the Archive closes, it is time to go to Maria’s guesthouse where you are going to enjoy a large and exquisite lunch. After several days of Maria’s hospitality, there could be a pending issue with high caloric intake. But fortunately there are several walking, cycling and running routes surrounding Simancas. The pine woodland of Antequera it is my favourite route, not only because of the thick woods – remember that ForSEAdiscovery is centred on wood and timber procurement – but also because here you can listen to birds singing while enjoying any number of other elements of the great outdoors that are sorely missed when living in a city. 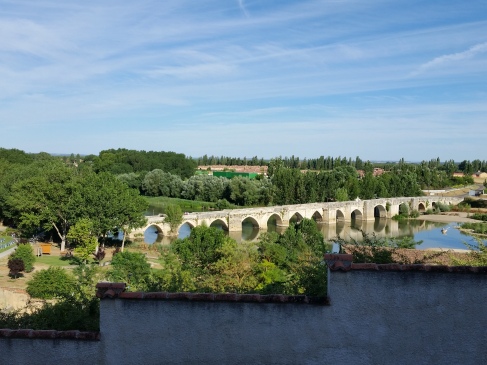 Pisuerga River running through Simancas and the medieval bridge.

As the sun sets, and the day is coming to a halt, there is no better way to end it than by having a beer either with colleagues or with Borja and Sergio, Maria’s sons, on the banks of the Pisuerga River. Between the modern hospitality and the Early Modern history, I always feel at home when I’m in Simancas.

Dr. Koldo Trápaga Monchet is currently carrying out his research at Instituto de Arqueologia y Paleociências at the New University of Lisbon as a Marie Curie ITN fellow of ForSEAdiscovery.